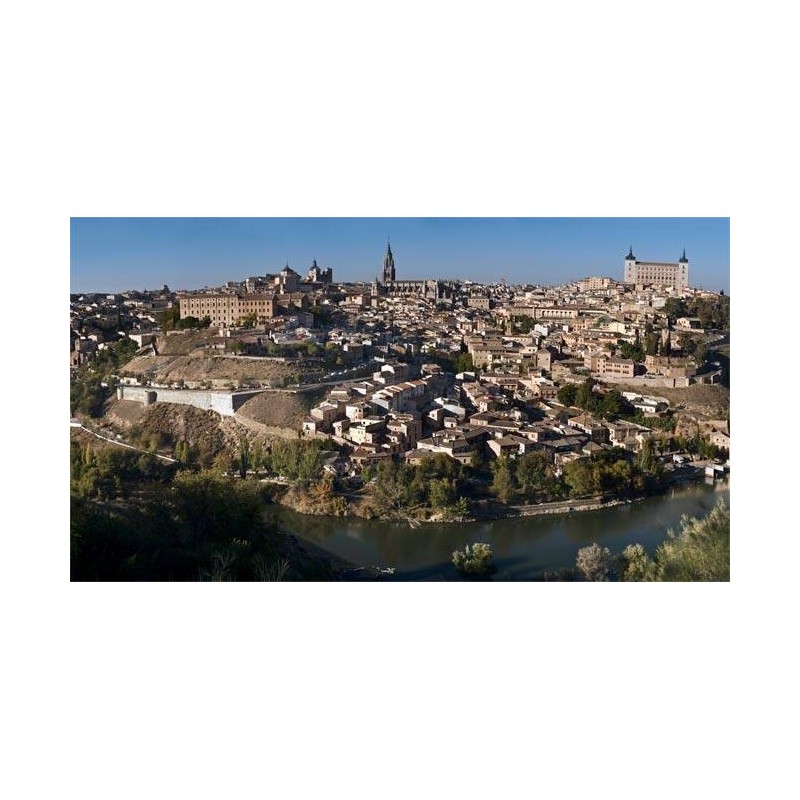 In our guided tour of Toledo, we´ ll take you for a walk through its medieval streets, with the possibility of visiting some of its main monuments inside. You will also have the chance to taste its delicious marzipan and shop for souvenirs. And we´ ll also stop at the best spot outside of the city, from where to enjoy the most beautiful panoramic view of Toledo and take some pictures.Length of the tour: 5 hours (half day), 8 hours (full day) since we leave Madrid until we come back.

Toledo is known as "The Imperial City" for having been the headquarters of the court of Charles I, and as "the city of three cultures", having been inhabited for centuries by Christians, Jews and Muslims. It has many attractions and is a World Heritage Site since 1987.The city is located on the right bank of the Tagus river, on a hill a hundred feet above the river, which surrounds it like a moat.In our tour, we shall see Toledo from the place where you can enjoy the best panoramic view of the city, and then we shall walk through the streets of the old town, from the Zocodover square  to Commerce street, reaching the square of the City Hall, the Cathedral and the Episcopal Palace, and continuing towards the church of Santo Tomé (which houses the masterpiece of El Greco: The Burial of Count of Orgaz) and the Jewish quarter (with the synagogues of Santa María the White and Transit), the Museum of El Greco, and passing by the monastery of San Juan de los Reyes, we shall reach the bridge of San Martin, where the bus will be waiting to take us back to Madrid.This visit may be of 5 hours (since we leave Madrid until we come back) or of 8 hours (since we leave Madrid until we come back). The 8 hours tour allows you to have lunch in Toledo and visit more monuments. The monuments to visit will be at customer's choice.During the 5 hours tour, we can visit 2 or 3 monuments inside (for instance: Cathedral, Santo Tomé, Santa Maria). In 8 hours, we can visit 4 or 5 (Cathedral, Santo Tomé, Museo del Greco, Santa María, San Juan, among others).

History and monuments of ToledoThe city's history dates back to the Bronze Age. It was conquered by the Romans in 193 a. C. There are various Roman remains in the city, such as the aqueduct or the circus. After the Germanic invasions, the city became the capital under Leovigildo, and later the principal ecclesiastical seat of the Visigothic Kingdom. In 711, Toledo was conquered, with little opposition, by Muslims led by Tariq ibn Ziyad. During Muslim rule, the former Visigothic capital was marked by its opposition and individualism, embodied in the Taifa of Toledo. Alfonso VI reconquered the city in 1085. During the modern age, it was the headquarters of the Catholic Monarchs and later it participated in the War of the Communities of Castile. After the court moved to Madrid in 1561, the city went into decline, accentuated by the current economic crisis. And in contemporary times, Toledo and more specifically its Alcázar, became a symbol of the Civil War for its long siege (today the Alcazar is the Army Museum).Main monuments:St. Mary's Cathedral (Gothic, XIIIth c., with the Transparent by Narciso Tomé, baroque), the Church of Santo Tomé (Mudejar style of the XIVth c., it houses the famous painting The Burial the Count of Orgaz, by El Greco), the synagogue of Santa María la Blanca (at first it was a synagogue and later it became a Christian church, Mudejar style, XIIth c.), the Synagogue of the Transit (XIVth c., with the Sephardic Museum), Museum of El Greco (house museum designed as a recreation of the artist's home, which was lost centuries ago, with various paintings of the artist), the Monastery of San Juan de los Reyes (Gothic style, XVth c.)In addition: Santa Cruz Hospital (Renaissance, XVIth c.), the Tavera Hospital (Renaissance, XVIth c.), the Alcazar (fortress on rocks, located in the top of the city, overlooking the city, sixteenth-century. Since June 2010 it houses the Army Museum), the Church of San Roman (Mudejar style, today 'Museum of the Councils and Visigoth Culture': Romanesque paintings of the XIIIth c. and an important collection, original and replicas, of Visigothic gold, along with other archaeological objetcs dating from the sixth to eighth centuries), the Church of Santiago del Arrabal (Moorish style) , El Cristo de la Luz (small mosque oratory made in 999, later extended with a Mudejar apse for conversion into a church).There are also several city gates, the Puerta del Sol (Mudejar style, XIVth century), the New Bisagra Gate  (Alonso de Covarrubias, XVIth c.), the Old Bisagra Gate or Alfonso VI gate, the Cambron Gate (of Muslim origin, rebuilt in the XVIth c.), and the bridges over the Tagus River(Alcantara and San Martin), the Castle of San Servando (medieval castle along the banks of the Tagus and the Infantry Academy), the Palacio de Galiana (XIIIth c., Mudejar style) and the ruins of the Roman circus.